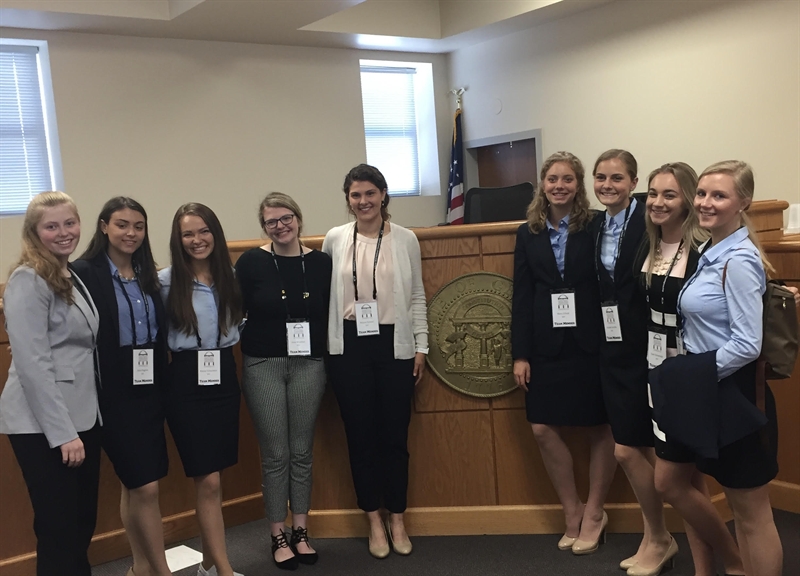 The power protected National Competition began on Friday May 17, with 46 total teams competing. The Pandas started off strong with a win over Kansas, leading to a matchup with eventual 9th place finisher, Pennsylvania. The Pandas competed well, but lost the second round matchup.

On the morning of May 18, the Pandas found themselves facing perennial power, Alabama in the third round of competition. With a strong showing, the Pandas defeated Alabama and were then faced with a tough matchup against the eventual 5th place finisher, South Carolina in the fourth round of the tournament. In another poised outing, the Pandas held their own, but eventually lost the final round of competition.
At the conclusion of every round, each opposing team selected a Star Witness and a Star Attorney to award to each other. Briana Seibert was awarded Best Witness 3 separate times, with Mara Schutt being awarded in another round. Seniors Julia Hughes and Natalie Gerdes were each awarded a Star Attorney throughout the rounds and junior Emma Scharstein was twice awarded Star Attorney.
Our Kentucky State Champions and National competitors were coached by three former Notre Dame Academy Pandas. The 2018-2019 Pandas were led by head coach Katelyn (Connor) Mollett ’08 and assistants Amy Hebbeler ’09 and Emily (Cooney) Couch ’10. All three alumnae are current practicing attorneys in the community.

Coach Mollett said, “I could not be prouder of the girls on this team. After just 4 short years we have accomplished a feat that most teams with 10 years or more experience have not. Our girls are extremely dedicated and truly amazing young woman. I am so proud to be a part of NDA and honored to Coach this program.”