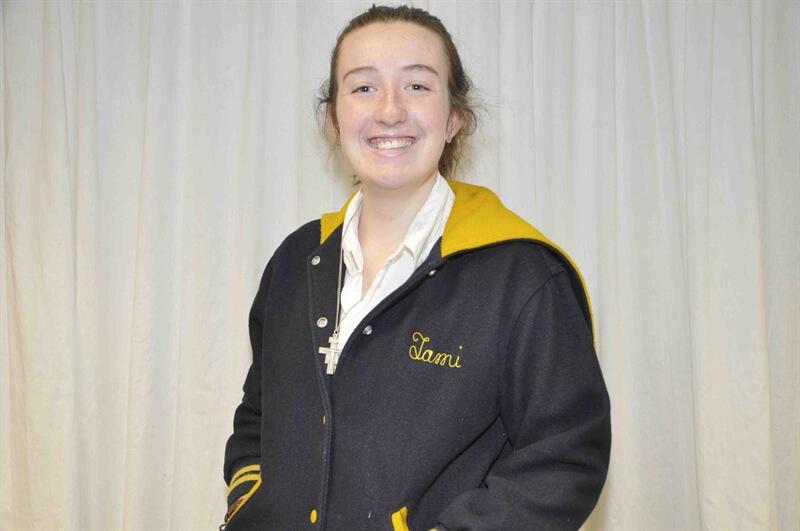 Notre Dame Academy celebrated the gifts of Catholic education this week as part of the nation’s 40th celebration of Catholic Schools Week. This year’s theme was “Catholic Schools: Communities of Faith, Knowledge and Service.” Throughout the week, Notre Dame Academy focused on the school’s century long commitment to faith development, academic excellence and community service. The NDA community participated in many activities to honor the school’s Catholic heritage and school spirit throughout the week.
NDA’s observance of Catholic Schools Week began with “Nunday Monday” and Mass celebrated by Bishop Roger Foys. Many of the Notre Dame Sisters attended this special Mass where NDA students gave thanks for the guidance of the Sisters of Notre Dame charism. NDA’s community also acknowledged the vision and dedication of the Sisters making the Notre Dame education available to so many. True to their spirit of giving, the Sisters served ice cream sundaes to NDA students at lunch and distributed Mary medals to each of the freshmen and new students.

NDA celebrated sisterhood and the bond that unites them as women of Notre Dame on Tuesday. They also remembered the students attending their sister school in Uganda and acknowledged their similarities as women making a difference in the world. In honor of NDA sisterhood, students dressed as twins and triplets.

Wednesday Notre Dame Academy continued their celebration of Catholic Schools by recognizing NDA’s faculty, staff and administration and all they do to provide an exemplary education. It was also a day to focus on the school’s commitment to community service. NDA’s gym was packed with Panda spirit for the 3rd Annual Notre Dame Academy v. Covington Catholic charity volleyball game. Over 600 students were in attendance to cheer for the Pandas and Colonels and do their part to raise $2500 for the Emergency Cold Shelter of Northern Kentucky.

In honor of Student Appreciation Day on Thursday, students dusted off their elementary school uniforms and enjoyed a night without homework. Notre Dame wrapped up Catholic Schools week with a celebration of the decades of Catholic education at NDA and enjoyed the school’s annual talent show.