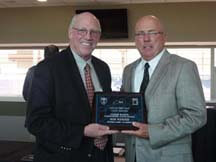 Congratulations to Coach Rob Hardin who was recognized at the Athletic Director’s Conference Award Banquet on April 25 as the Garnis Martin Outstanding Coach of the Year.  This award recognizes an individual whose career has demonstrated knowledge of the game, rapport with his/her teams, positive conduct both on and off the field, community involvement, positive rapport with officials and other coaches and a emonstrated commitment to the high school student’s experience in interscholastic athletics.

As NDA’s most tenured coach, Rob’s 17 years have netted some outstanding teams while playing one of the toughest schedules in the state.  Under his leadership, his teams have recorded 174 wins and 33 losses, winning three State Championship Titles (1997,1998, 2010), three State Runner-up Titles (2002, 2009, 2012) and finishing consistently in the top four at the state level!  Rob’s dedication and expertise in the field have earned him numerous Coach of the Year Awards.  More importantly, Rob’s passion for the game along with his role of helping players develop into young women ready to make a difference in the world are the true reasons he coaches tennis.