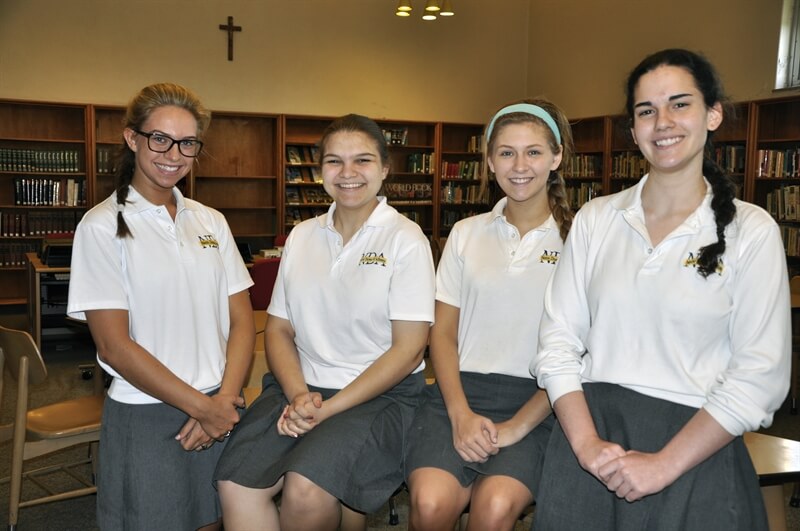 Notre Dame Academy juniors Emily Bautista, Stephanie Hacker, Emma Jacobs, Szofia Komaromy-Hiller, Abigail Martin, Katie Maurer, Maggie McLeod, and Clara Wood have all been selected to participate in the 2013 Governor’s Scholars Program. Jessica Vogt has been selected as an alternate. The six-week summer residential program recognizes exceptional high school students in Kentucky. These students were nominated by Notre Dame Academy and went on to compete on a state-wide level to participate in the program. The criteria on which applicants were selected includes academic achievement, extracurricular activities, service, leadership experience, teacher recommendations, and an original essay.

Notre Dame Academy’s Katie Kloska (Dance), Abigail Martin (Vocal Music), Katie Maurer (Musical Theatre), Hope Pauly (Musical Theatre) and Meredith Ziegelmeyer (Dance) have all been selected to participate in the 2013 Governor’s School for the Arts program. Rachel Birrer and Maggie Flanagan have both been selected as alternates in Visual Art. The program is an intense three-week summer residential program for Kentucky’s finest young artists held on the campus of Transylvania University in Lexington. The students will have the opportunity to live in a supportive learning environment and study with a group of distinguished teaching artists while participating in the program.

The Governor’s Scholars Program originated in 1983 in an effort by Kentucky’s leaders to entice the state’s “best and brightest” students to pursue educational and career opportunities in Kentucky. The program’s mission is to enhance Kentucky’s next generation of civic and economic leaders.

The Governor’s School for the Arts was established in 1987 as a program of The Kentucky Center for the Arts and Kentucky Department of the Arts. GSA provides hands-on opportunities in nine art forms including architecture, creative writing, dance, drama, instrumental music,  musical theatre, new media, visual art and vocal music.