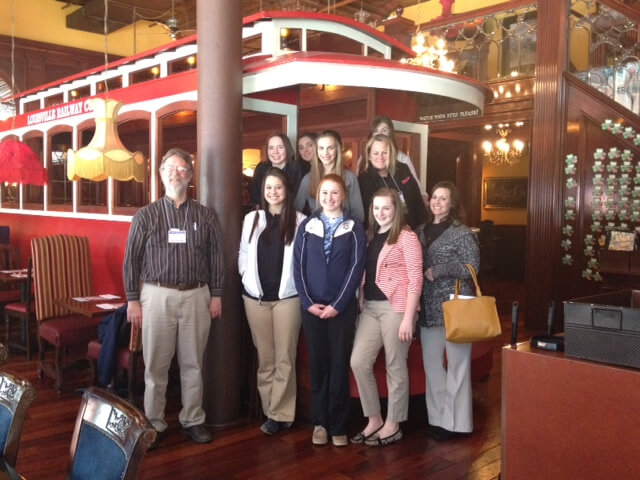 Recently, Notre Dame Academy’s S.W.A.T. (Students Working to Advance Technology) Team went along with Molly Mullee, NDA Dean of Instructional Technology, to present with her at the Kentucky Society for Technology in Education Conference (KYSTE) in Louisville, Kentucky. The topic of the presentation was “Going 1:1 iPad; a Student’s Perspective” for which eight students each gave their perspective of how the implementation of the iPad has changed the way they learn, their teachers teach, and how the NDA community as a whole has changed.

During this initial year of the 1:1 iPad at NDA, Mrs. Mullee and the S.W.A.T. Team have built a support system that has enabled school wide community members to seamlessly operate with this new technology. Mrs. Mullee was so pleased with the outcome, that she could not envision presenting at KYSTE without these critical stakeholders.

These young ladies were so impressive that they were asked to repeat their performance when faculty members from Georgetown Visitation Preparatory School in Washington DC visited NDA to see how our 1:1 iPad Initiative implementation process was integrated. In a recent follow up email, one GV faculty member commented:

?”?Dear Mrs. Mullee: Christine McGovern has asked me to present to the GV faculty about our trip to NDA, so I wanted to follow up with you as a resource.  Of the 10 of us who visited, we unanimously agreed that the student presentations and interactions were the highlight of our trip.  They were engaging, dynamic and absolutely sold of the validity of the 1:1 program.  Do you happen to have any of those presentations recorded, so we could show one or two to our faculty?  Of course this would be at your discretion and the discretion of the student presenters.  We thought that by sharing the first hand experiences of students we would be able to spread the excitement and possibility of the program.”

“This is a true testament to the validity of the two-year-old program at NDA,” says Mullee. “In February of 2011, the iPad itself being less than a year on the market, we began an iPad pilot program at NDA with just 22 iPads. This school year we implemented full 1:1 iPad integration and this initiative is already supporting our mission at NDA to educate young women to make a difference in the world.”