Groundbreaking for the new school building on Hilton Dr. was held on April 16, 1961, an off-and-on snowy day. Richard A. Ackerman, Bishop of Covington, officiated walking across the south pasture to bless the ground. “Everyone present experienced a peculiar delight on the afternoon of April 16, when His Excellency, the Most Rev Richard A. Ackerman, escorted by Monsignors and priests, broke ground for the new Notre Dame Academy. The first spadeful of earth was turned over right in front of the Lourdes grotto at St. Joseph Heights. The weather – lightning and thunder, rain, hail, sleet before dawn; a heavy, whirling snowfall and blizzard in the afternoon, topped by an outpouring of brilliant sunshine”. (The Gavel, Summer, 1961) 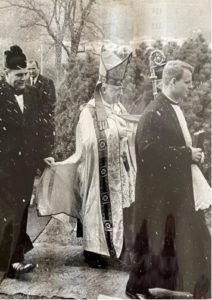 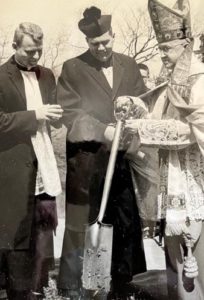 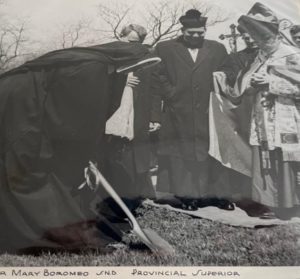 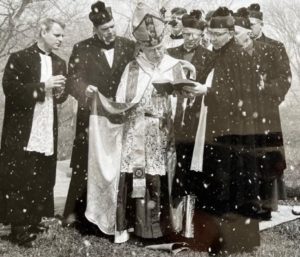 The building rising on Hilton Dr. was ready for the cornerstone which was laid on September 18, 1962. Bishop Ackerman blessed the cornerstone at the site of the original main entrance on the north side of the building. 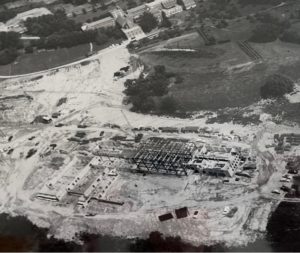 In a letter sent from the Sisters of Notre Dame, Covington to the Motherhouse in Rome, the events of the day were detailed with such exuberance, bringing the event alive so that all members of the Notre Dame congregations could join in the joy of accomplishment for the Covington providence. The following excerpts from the letter describe the excitement of all present:

“Before the day is over, we must share with you the simple, yet impressive, ceremonies of cornerstone laying at the new Notre Dame Academy—our common goal, our common joy. What a genuine thrill it was no longer to envision our dream, but to behold, silhouetted against a glorious sunshiny sky, a new Notre Dame rising majestically and soon to be the sanctuary of the strong and cherished bond—the spirit of Notre Dame. We are reminded again of Sister Mary Agnetis’ comment, “A new Notre Dame Academy, yes; a new Notre Dame, never!”

At 1:00pm this afternoon, a fleet of 8 buses and many private cars transported the entire student body (over 560 students) to St. Joseph Heights, via the newly opened superhighway, Interstate 75. At their destination, one group of girls arranged themselves in a long open file, thus forming a guard of honor through which Sr. Mary Immacula led ranks upon ranks of other students who preceded the acolytes and cross-bearer, conducting the way for His Excellency Bishop Ackerman and the clergy. Another contingent of students created a guard of honor at the immediate site of the cornerstone. Cordially swelling the crowd were the dear sisters and novices from “across the pasture”, undoubtedly the power-house of prayer for this undertaking, together with the entire NDA faculty and personnel, officers of the PTEL, the FONDA, the Notre Dame alumnae, parents and friends. 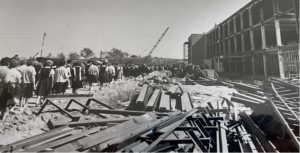 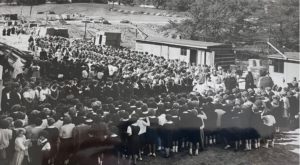 For the processional, the students sang out loud and clear the traditional Lourdes melody “Immaculate Mary”. You recall, of course, that here was the site of the beautiful Lourdes grotto, a familiar landmark rich with memories. During the prayers, blessings, sealing and setting of the cornerstone, the chorus rendered “Hail Mary” by Lockhart and the “Lord’s Prayer” by Schehl. A jubilant thanksgiving “Praise to the Lord”, the 17th century version by Neander, provided an appropriate recessional. 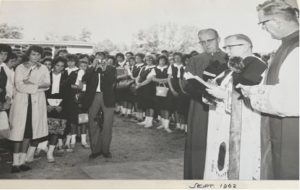 Work on the construction was not interrupted for this day’s ceremony. Large leveling and grading tractors grinded on feverishly while hammering, riveting and drilling sounds overhead seemed to beat out the urgency of this tremendous project. The Sisters here at Notre Dame Academy take this occasion to thank each one of you for your generous and loyal support in this endeavor. Our grateful sentiments are best expressed on the second stanza of the recessional hymn:

“Praise to the Lord, who doth prosper thy work and defend thee, Surely his goodness and mercy shall daily attend thee. Ponder anew what the Almighty can do, Who with his love doth befriend thee.” 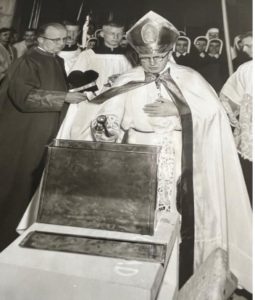 Items placed in the cornerstone:
Envelope #1
a) a written history of Notre Dame Academy beginning in 1875 with the arrival of the
Sisters to Covington
b) names of present leaders (Church, nation, state, city)
c) names and photos of religious superiors
d) names of members who have served on the NDA faculty
e) names of present officers and executive board members of the following NDA support groups: NDA Alumnae Association, Parent-Teacher Educational League (PTEL), Friends of Notre Dame Academy (FONDA)
f) financial statement and brochure of the NDA Building Fund Campaign
g) the 1961 report on library holdings
h) the 1961-62 issues of The Gavel

Envelope #2
a) copy of the initial letters sent between Sister Mary Agnetis and Mr. Conrad N. Hilton in which Sister asked for aid and his reply to send $500,000.00
b) photo of Mr. Hilton
c) photo of Sr. Mary Agnetis

Box #1
a) Reliquary Cross with 20 relics
b) various medals and religious articles including a Sacred Heart badge, brown and green scapulars, a bottle of Lourdes Water, a rosary blessed by Pope John XXIII, statues of special patrons of the Congregation and the Infant of Prague and St Martin de Porres
c) pressed flowers from the casket of Mother Mary Vera
d) many holy pictures of favorite saints

Completing the collection of artifacts were the following additional items which were laid loosely in the cornerstone included current coins and copies of The Messenger, Enquirer and the Post-Times Star.