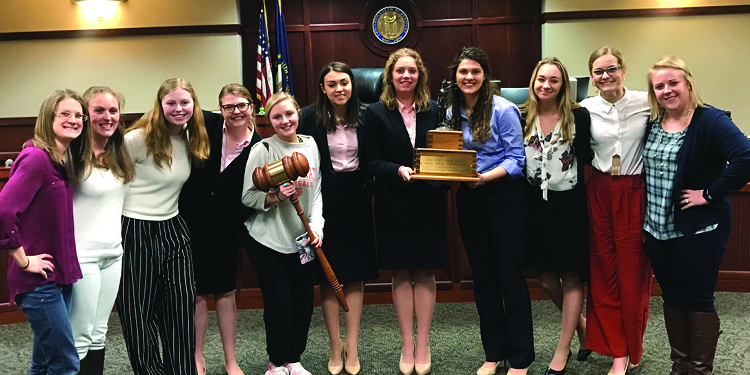 On Sunday, March 4, Notre Dame Academy’s Mock Trial A Team captured the 2019 state title making Kentucky Mock Trial history as the first all-girl team to win the State Championship. After placing first in the region, NDA’s Mock Trial A Team moved on to the state competition where they defeated the defending state champions, Dixie Heights High School and earned a trip to Nationals in Athens, Georgia in May. NDA’s Mock Trial B Team also competed at the state level placing ninth.

Under the direction of faculty member and alumna Hillary Johnson ’05, NDA formed it’s first Mock Trial team four years ago as an extracurricular club. That club has since evolved into a half-credit Law and Justice class introducing students to the legal system of the United States. While the class is moderated by Ms. Johnson, three NDA Alumnae and current practicing attorneys, Katelyn (Conner) Mollett ’08, Amy Hebbeler ’09 and Emily Cooney Couch ’10 help prepare the students for Mock Trial competitions. They also explore with students the study of the basic social contracts of society enabling students to understand democratic values of justice, equality under the rule of law, responsibility, freedom, human rights, equity and human dignity.

“This class teaches our students to think on their feet,” says Ms. Johnson. She adds, “Mock Trial students invest a tremendous amount of time into their case preparation. In doing so, they gain valuable critical thinking skills that they can then apply to all of their classes.”

“In its short 4-year program existence, NDA’s Mock Trial class has made extraordinary strides,” says NDA Principal Mr. Jack VonHandorf. “I am impressed with the poise and professionalism of our students especially in the heat and intensity of Mock Trial competition. Our NDA community is very proud of their success and wish them well at Nationals.”