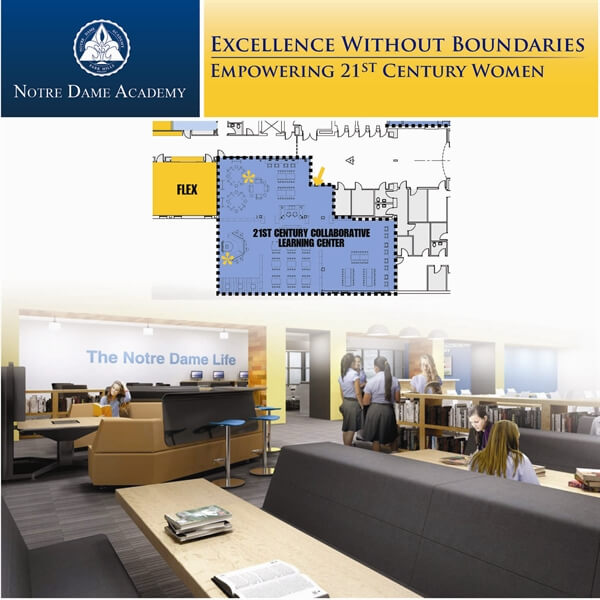 Notre Dame Academy has announced the launch of a $7 million capital campaign to renovate its 20th century building into a 21st century environment where it will continue to serve as a premier Catholic high school, providing excellent academic and co-curricular programs that prepare graduates to be outstanding female leaders serving the world.

Thanks to a strong leadership team, the campaign is well on its way to reaching the $7 million goal for the Excellence Without Boundaries – Empowering 21st Century Women capital campaign. The campaign has already raised $5 million, over 70% of the $7 million goal in the campaign’s initial phase, a six-month period of intense internal planning and preliminary gift solicitation behind the scenes. The initial phase ended Monday with the public announcement of the campaign at a special ceremony honoring NDA alumna, Ruth Wehage Schroer ’38, who bequeathed $1.995 million to NDA that will support the campaign. NDA’s goal is to secure the remaining $2 million over the course of the next twelve months.

With its Catholic identity at the heart of a Notre Dame Academy education, the chapel has long been an important space within NDA’s school building. Having a special place where students can go for quiet reflection or to pray and honor God is increasingly important in this technological age. With a focus on the spiritual formation of its students, Notre Dame Academy plans to renovate and expand its chapel so that it will hold at least one full grade level and their teachers.

The centerpiece of the Excellence Without Boundaries campaign is a 21st Century Collaborative Learning Center. For several years, Notre Dame Academy has led the way in educational technology and STEM related fields. Educators at NDA believe that fundamental skills such as collaboration, communication, creativity and critical thinking are required for success in today’s global community and they have integrated core competencies that have enabled students to thrive in the 21st century. NDA’s 21st Century Collaborative Learning Center will support the new and innovative ways that NDA students utilize a library to access online resources and collaborate with others to problem solve and create new ideas.

Social engagement is an important element of the Notre Dame Academy experience. The goal for NDA’s new Food Court and Student Commons is to create a space that will serve as a home away from home for students. It will provide an environment that is conducive to quiet study time and accommodate small or large group events as well as the entire NDA student body for assemblies and presentations.

“This is an exciting time for Notre Dame Academy,” said NDA President Dr. Laura Koehl. “Through our Excellence Without Boundaries campaign, we have embraced the bold vision God has for us: equipping our students to lead the way as Catholics in this globally competitive information age.” Dr. Koehl added, “This campaign powerfully supports NDA’s commitment to academic excellence and mission of educating young women to make a difference in the world.”