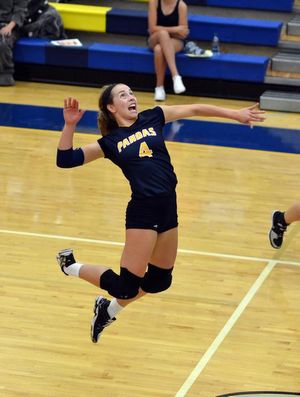 As NDA’s outside hitter and libero, Morgan led the Pandas to a 33 – 6 record and to the KHSAA State semi-finals, where she was named to the 2015 KHSAA State Championship All-Tournament team. She received the LaRosa’s MVP award, was named Player of the Year by Cincinnati Enquirer NKY and Gatorade KY, was selected 1st team all-state and received the crown of 2015 Miss KY volleyball by the Kentucky Volleyball Coaches Association. In addition, Morgan has been named a PrepVolleyball High School All-American, a MaxPreps High School All-American and an Under Armour All American. She was one of 12 selected to USA Youth National team and representing the USA in the Youth World Championship in Peru.

Morgan is an exemplary student maintaining a 4.26 GPA in the classroom. Morgan believes that encouraging young girls to play sports not only helps them to lead healthy lifestyles, but it also teaches them important life lessons. She promotes a good work ethic and is a dependable example for the quality of determination.She loves to volunteer at clinics for girl’s youth volleyball and can regularly be found assisting at Northern Kentucky Youth Volleyball Club. She also helps annually with the Notre Dame Academy children’s volleyball camps as well as making the occasional return to her grade school, Blessed Sacrament. She especially likes the opportunity to help kids learn about volleyball with the hope they might develop the same passion for the sport she has found.

Morgan will attend Stanford University in the fall and join the Cardinals on their volleyball team.