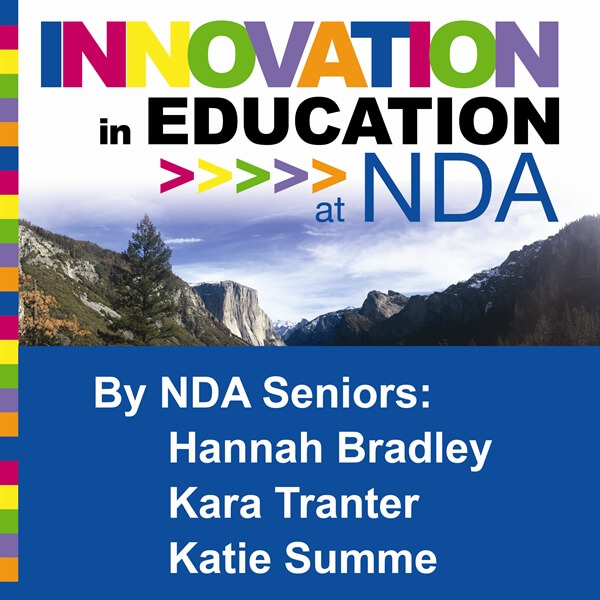 Intel Museum by Hannah Bradley
We learned many things at the Intel Museum that I would never have known had I not gone on this trip. For example, an Intel chip is in every device that transmits information, no matter what brand it is. iPhones, iPads, Androids, and Google Chromebooks all have Intel chips or chipsets. A chipset is a set of electronic components that determines system performance in a device. If it were a part in your car, it would be the engine. That is how important the chip is. Chipsets were just one of the many things we learned about. We dressed up as Intel employees who work hands-on with these special chips. They have to wear suits that do not allow particles, such as dust, to contaminate the chipsets. The experience of touring and learning the history of Intel opened my eyes to see that there is so much behind the scenes that goes into doing a basic task such as simply turning on your cell phone.

Google Headquarters by Kara Tranter
Dreaming of a future in the technological world and working for a company as large as Google seemed like a far off fantasy for me. When the opportunity arose to travel to Silicon Valley, I knew that this was the first step in making my dreams a reality. Visiting the Google Headquarters taught me what it takes to work for a company that is widely known around the world. Throughout the entire day on Google’s campus, we learned about what it means to “think like a googler” and what a typical day of a Google employee entails. Breaking up into teams to design a 21st-century library, having a “Google lunch,” riding a Google bike, and testing out a sleep pod all gave us a good idea of what it would be like to work for a company like Google. The visit to California and Google exceeded my expectations and gave me ideas for my future. This trip is one that I will never forget.

Yosemite National Park by Katie Summe
During our trip to Silicon Valley, we took a day away from the more technological aspects of the weekend and drove to Yosemite National Park. There we explored the incredible views of the mountains and forests, a privilege to see. El Capitan is one of the more popular attractions in the park. While this was more of a day away from technical buildings and informational sessions, El Capitan still connects with technology as one of the operating systems for Apple. It was really cool to see the mountains in real life rather than on a screen. Yosemite was easily one of the most incredible places I have been able to experience. This trip was one of the greatest weekends of my life. While traversing one of the greatest national parks in the United States, we collectively agreed that taking pictures of the mountains was fruitless: there was no way you could ever capture the beauty. I wish I could go back!

« Student of the Month – April
Baby Day at NDA »