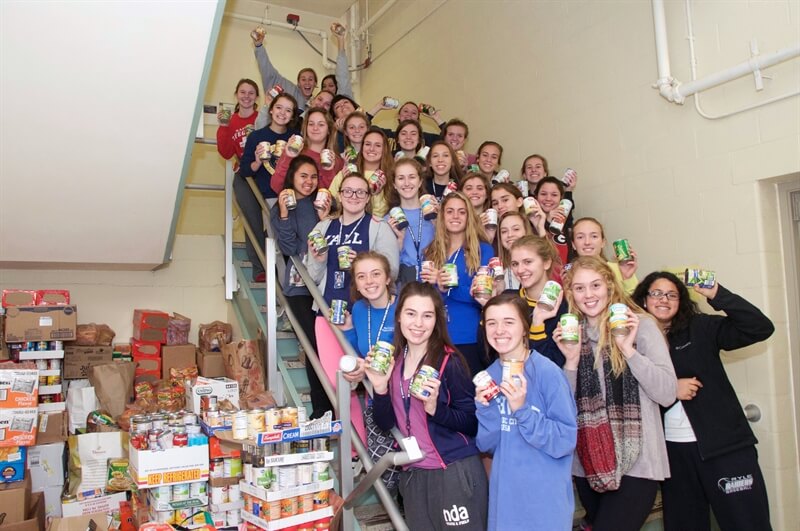 The numbers are in and the results are clear; NDA has once again CANNED the Colonels! After collecting more than double the canned goods, students at Notre Dame Academy are claiming victory today over Covington Catholic in the annual NDA/CCH Canned Food War. This year, the NDA Pandas pulled out all of the stops collecting 13,407 canned goods while the CCH Colonels collected 6,393.

While winning the canned food war and having the CCH boys come to NDA to clean up lunch for a day was a great incentive, it certainly was not the most important reward of this project. “The NDA/CCH Canned Food War is a great way for our NDA community to show our school spirit and make a difference in the lives of others,” said Abby Schuh, NDA senior. “It’s unbelievable that between the our two schools we collected nearly 20,000 canned goods. That will go a long way in helping those in need this winter.”

This annual battle began in 2010 when Student Council members from Notre Dame Academy wanted to do something to help fill the shelves of a local St. Vincent de Paul food pantry. They realized that if they challenged the students at Covington Catholic to a Canned Food War, they could collect twice as many items for those in need.

The competition between these two schools has aways been intense but students at both Notre Dame Academy and Covington Catholic realize that everyone is a winner in this Canned Food War. This morning in a Thanksgiving prayer service held at Notre Dame Academy, NDA Principal Mr. Jack VonHandorf reiterated that thought saying, “Thank you for your generosity in the NDA/CCH Canned Food Drive. It is a proud moment to be the principal of such an amazing and spirited groups of young women committed to making not just a difference, but a tremendous difference in the world.”

The war is over for this year and NDA students are thrilled with their victory and the thought of  making a difference in the lives of others. The canned goods collected at NDA will be distributed throughout the  St. Vincent de Paul food pantries of Northern Kentucky and Covington Catholic High School is donating their food items to Be Concerned.