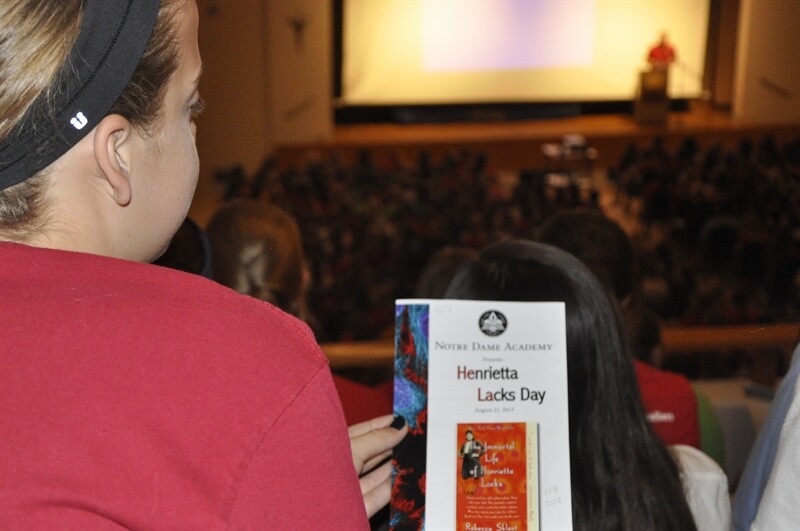 Summer reading assignments are generally for students, but not at Notre Dame Academy. For the second year, the entire NDA community, including students, faculty, staff and administration, has participated in a common reader assignment. This summer they read The Immortal Life of Henrietta Lacks by Rebecca Skloot.

The Immortal Life of Henrietta Lacks tells the captivating story of a woman whose cells were taken without her consent. She was a poor black tobacco farmer who in 1951, had no idea that her cells would become one of the most significant tools in medicine. Her name was Henrietta Lacks but scientists came to know her as HeLa. The HeLa cells have been bought and sold by the billions and were vital for developing the polio vaccine, cloning, gene therapy, in vitro fertilization, and more. Sadly, Henrietta’s family, also unaware of Henrietta’s contribution to science, couldn’t even afford health insurance.

On Friday, August 21, the NDA community celebrated “Henrietta Lacks Day” coming together for an entire day of activities, a panel discussion, and learning sessions centered on their common reader assignment. Intriguing topics such as race, bioethics, informed consent and more were part of the day. Students and faculty participated in segregation actives, learned about cell culturing techniques and discussed genealogy as part of this special day.

NDA Principal Mr. Jack VonHandorf commented, “It was inspiring to be a part of such a collaborative effort. The panel of speakers had many kind words to say about our students and that should be a proud moment for all of us.”

NDA hosted a fundraiser as part of the day which supported the Henrietta Lacks Scholarship Foundation. The non-profit organization provides educational and medical grants to needy individuals who have made important contributions to scientific research, particularly those used in research without knowledge or consent.

“It was wonderful to see our students connect the story of Henrietta Lacks to our mission, ” said NDA President Dr. Laura Koehl. “Henrietta’s story is indeed immortal as it continues to challenge and inspire so many, the latest our NDA community.”