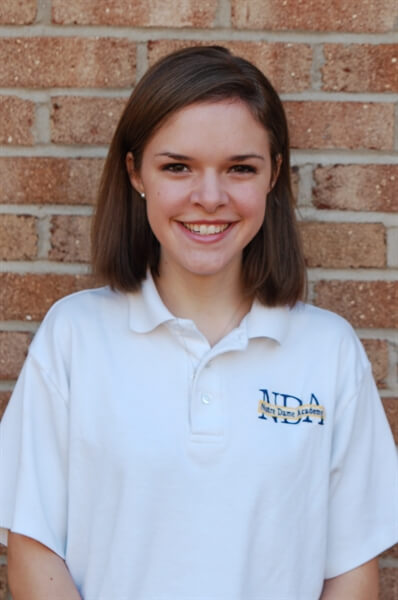 Kelsey Sucher achieved the ultimate goal for anyone taking the ACT college entrance exam: a perfect composite score of 36. Kelsey, a junior at Notre Dame Academy, became one of the few elite students across the nation to accomplish this impressive feat after taking the test in December. Her accomplishment is significant and rare. On average, less than one-tenth of 1 percent of all test takers earns the top score.

In addition to her exceptional score on the ACT, Kelsey is very involved at Notre Dame Academy and in the community. She participates in NDA’s Science Research Program and is a member of the National Honor Society and the National English Honor Society at NDA. Kelsey is also a member of NDA’s Junior Engineering Technical Society (JETS), Physics Club, Academic Team, French Club, and Interact.  Kelsey  tutors at the Urban Education Center, volunteers at Born Learning Academy every month and helps with various fundraisers and recruitment events at NDA as well.

“Kelsey is truly a young woman making a difference in our school and in our world,” said NDA President Dr. Laura Koehl. “We are very proud of Kelsey’s achievement on the ACT and the positive impact she strives to have in our community.”