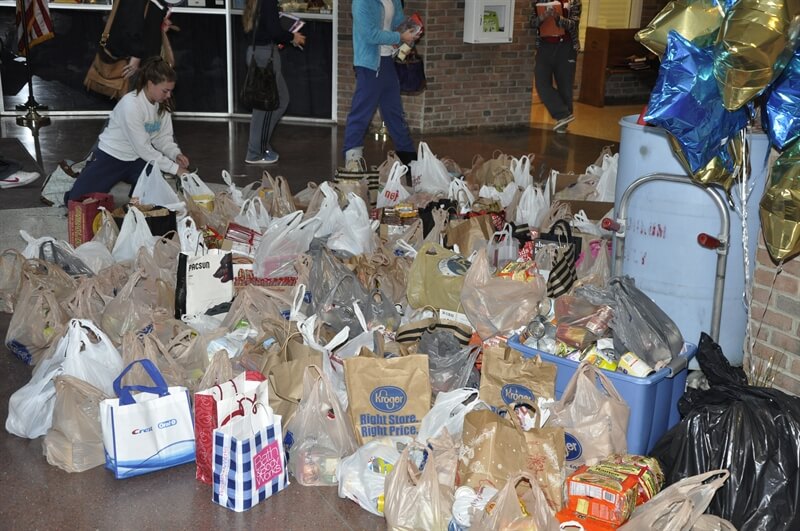 The annual battle to see who has collected the most canned goods, Notre Dame Academy or Covington Catholic High School, is coming to an end. Today the Pandas and the Colonels will count their cans and declare a winner. The stakes are high for these philanthropic teens. If the Pandas lose, members from NDA’s Student Council will have to serve lunch to the CCH Colonels for a day. If the Pandas win (which they think is a pretty good bet this year) members from CCH’s Student Senate will clean up lunch after them for a day.

This is the fourth year that the two schools have challenged each other to a canned food war. The battle began in 2010 when Student Council members from Notre Dame Academy wanted to do something to help fill the shelves of a local St. Vincent de Paul food pantry. They realized that if they challenged the boys at Covington Catholic to a Canned Food War, they could collect twice as many items for those in need.

In 2010, the NDA Pandas were victorious but have lost the battle the past two years. This year they are confident that the CCH boys will be cleaning up lunch for them after they declare the towering number of canned goods they have collected.

While the competition between these two schools is fierce, students at both Notre Dame Academy and Covington Catholic realize that everyone is a winner in this Canned Food War. “Seeing the massive amounts of canned goods and non-perishable food items piled up in the hallways of our school is a wonderful reminder of our students’ commitment to serving others,” says NDA President Dr. Laura Koehl. “Students at both NDA and CCH can be proud of the work they have done to support our local agencies who provide food to those in need.”

After the cans have all been counted and a winner is declared, the work is not over for the Pandas and the Colonels. Tomorrow morning they will load all of the food items they have collected into trucks to be delivered to their benefactors. Notre Dame Academy is donating their canned goods to St. Vincent de Paul and Covington Catholic High School is donating their food items to Be Concerned.