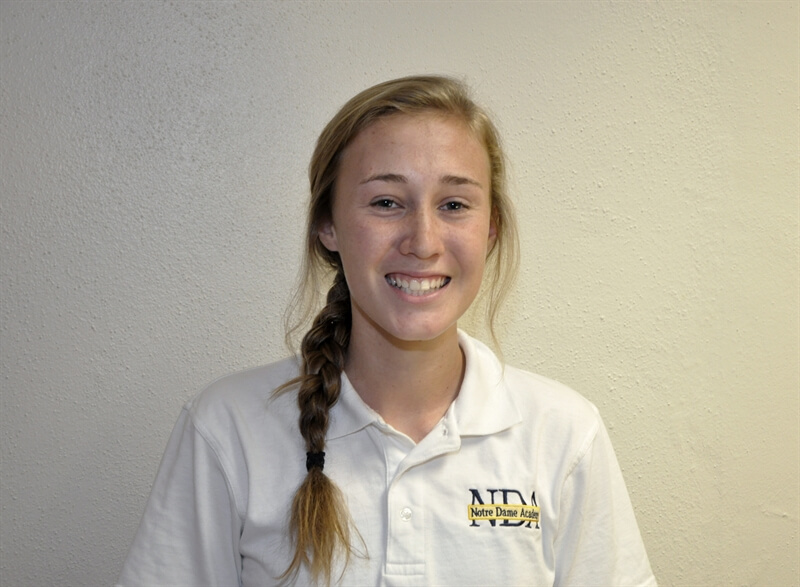 In her junior year at Notre Dame Academy, Libby Greenwell has been named November’s Student of the Month. Libby has been involved in many clubs and activities at NDA since her freshman year including: Spanish Club, Math Club, Pro-Life Club, Respect Club, and Interact Club. Libby also participates on Student Council and was a member of the Varsity Soccer Team.

Libby’s AP Biology teacher, Ms. Molly Proudfit, says that, “Libby is an energetic and inquisitive student. She comes to class prepared to learn (more so than the average AP student) and is engaged for every second of every class. She is willing to wrestle with tough biological concepts until she conceptually understands them.”

Ms. Proudfit also says that Libby is not afraid to ask questions. “Many times, AP students will be hesitant to ask questions in class or one on one because they are intimidated by the amount of material or they are afraid to admit that they don’t know, when they’re used to being at the top of the class. Libby has no such qualms. It is so refreshing to teach a student who genuinely wants to understand the content is willing to put in the amount of hard work necessary to do so. She is constantly engaged in class, seeking clarifications on the concepts so that she is confident that she has a clear picture of the material,” says Proudfit.

Libby’s teachers say that she is a kind friend to all of her peers. She is also known for being a hard worker and a diligent student. “Libby treats class time as it should be in an AP class – time to enrich and clarify what you’ve already learned the night before in your pre-reading,” says Ms. Proudfit. “I can tell by her questions that she has spent quality time with her homework, giving it much more than a cursory glance.”

Congratulations Libby on being named November’s Student of the Month!