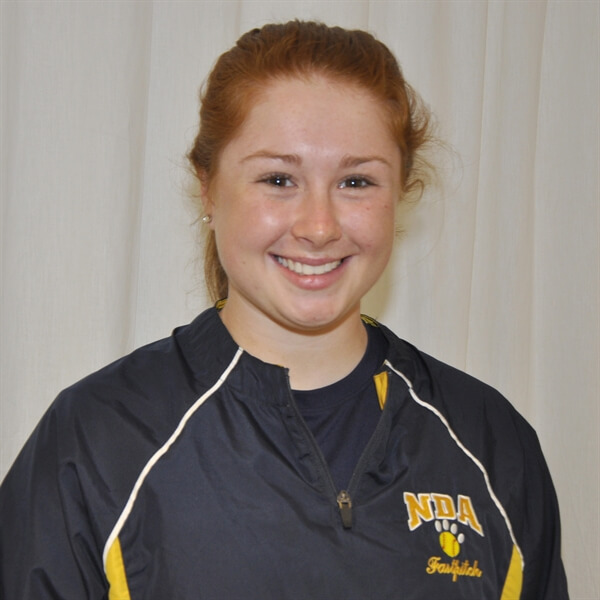 Senior Kelsey Michael has had her hand in many undertakings here at Notre Dame Academy.  It is her enthusiasm, positive attitude, commitment and spirited approach in all of it that has earned her the recognition of May Student of the Month.  Since she was a freshman, Kelsey has played on the varsity softball team alongside 6 others from the class of 2014.  One of the highlights of her high school career was winning regions last year after a difficult and trying regular season.

Kelsey has been a very active member of the SWAT Team since its inception two years ago, and recently she has prepared iPads for several groups of people including the Sisters of Notre Dame, the Urban Education Center, our sister school in Uganda and St. Augustine’s School in Covington.  Kelsey and other members of the SWAT Team participated in the KYSTE conference two years in a row where they shared information about NDA’s 1-1 iPad Program with educators from throughout the state of Kentucky.

Kelsey, demonstrating academic excellence by achieving 1st or 2nd honors every quarter of her high school career,  has served as an ambassador for Notre Dame Academy since she joined the community four years ago.  As Jane Kleier, NDA’s Marketing Director states, “Kelsey’s enthusiastic attitude and dedication to NDA have made her a tremendous asset to our recruitment efforts.”  Mrs. Kleier states further that “Kelsey’s spirited approach to sharing the Notre Dame Life with prospective Pandas is a testament to her strong leadership abilities.”  Most notably, Kelsey worked closely with Mrs. Gronotte this year to coordinate the annual Panda Sleepover for current eighth graders – a great example of how Kelsey used her talents to contribute to the success of the event.

Additional volunteer experience includes coaching little league softball at St. Agnes, assisting during softball clinics, coaching volleyball at Immaculate Heart of Mary and spending time at the Urban Education Center during its summer program.  Kelsey has also been a member of NDA’s Drug Free Club, Life Club and Interact Club for the past 4 years.  Congratulations, Kelsey on earning this recognition, and may you continue your success at the University of Kentucky and beyond!