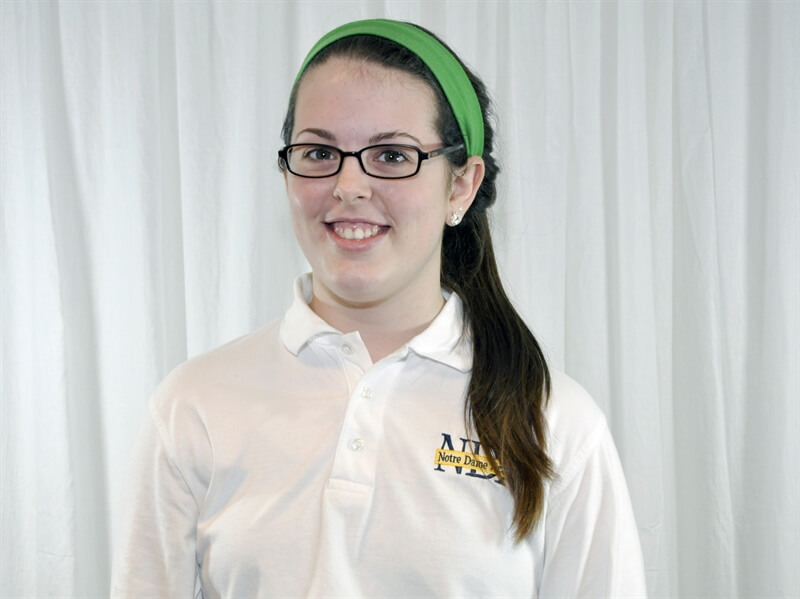 In her junior year at Notre Dame Academy, Shannon Wilson has been named March’s Student of the Month.  Representing her homeroom on Life Club this year, Shannon is a member of NDA’s Interact and Respect Clubs and participated in the most recent theatre showcase.  Shannon has served as an ambassador for the past 3 years, and she takes great pride in sharing with prospective families the benefits of an all girls’ education and the exceptional qualities of the NDA community.

Outside of NDA, Shannon volunteers at Redwood where she works in the nursery at least one day a week.  She dances at a local studio where she also teaches dance to 3-5 year olds each week.  Shannon has been dancing for a total of 10 years.

Since June 2012, Shannon has battled the challenging side effects of a brain tumor and surgery to remove the tumor.  She does not let this get in the way of anything she wants to achieve.  According to Shannon, NDA has given her strength on her road to recovery and has embraced and supported her through this journey.  Through all of her struggles, Shannon’s teachers observe her perseverance and upbeat, positive attitude.  Mrs. Stratman says that Shannon “works hard to keep up with her studies and rarely asks for exceptions and exemptions.”  Furthermore, Shannon puts others before herself and shows her compassion through prayer.  Shannon’s “intentions are always for someone else” when praying in class, Mrs. Stratman says.  Frequently, you will find Shannon putting others before herself.

Congratulations, Shannon Wilson, on being named March’s Student of the Month!