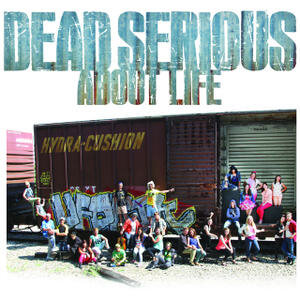 Young people today are faced with very difficult issues that often leave them feeling helpless and vulnerable.  Notre Dame Academy recognizes these real life problems and works to empower students to be able to manage difficult situations responsibly and by incorporating Catholic values.

In an effort to promote and support the emotional and social well-being of NDA students and other teenagers in the area, Notre Dame Academy recently welcomed the faith-based organization, Mishpachah, and their presentation of Dead Serious . . . About Life.  The theatrical production is a Christian-based portrayal of important matters that can affect young people.  It explores the issues of abortion, alcohol, drugs, religion, sex, cutting, self-esteem and suicide.  The program, sanctioned by the Diocese of Covington, was presented at NDA nearly ten years ago and came highly recommended by Notre Dame Academy alumnae.

According to the Center of Disease Control, suicide is the third leading cause of death among teenagers, and one out of every 53 high school students reported having made a suicide attempt that was serious enough to be treated by a doctor or nurse. “While the statistics are alarming, we believe it is critical be aware of the situations our young people may be experiencing and arm them with a positive message,” said Notre Dame Academy President Sr. Mary Lynette Shelton.  “This musical presented real life issues that may have prompted audience members to feel uncomfortable in the first half of the program, however, each of these issues was addressed within a Christian context in the second half of the show,” she added.

The final message communicated at the presentation was that suicide only creates more problems than it really solves and that there is a better way to live.  A Listening Room with professional counselors was available immediately following each performance of the show to provide teens a place to go if they needed someone to talk to.

Additionally, NDA students attended an assembly prior to the weekend performances to preview the production.  The assembly concluded in the classrooms where teachers showed students the many resources available to them on the school’s website.  NDA counselors were available to meet with any student who sought additional support.

NDA students reacted positively to the production. One student who found the show relatable to teens said, “The show addressed religion and the struggles we have as teenagers in practicing our faith.  If the character who had committed suicide just hung on a little longer, everything would have been okay.  God always finds a way to make everything better.  You just have to trust Him.  Don’t doubt God.”  Another student commented, “The actors and actresses were students who had experienced some of the issues, and they portrayed their characters very well.”  A third student remarked, “The show was blunt and got straight to the point of teenage issues.  They hit on the fact that life will turn out just fine despite the many issues.”

Notre Dame Academy Principal Dr. Laura Koehl feels strongly about the awareness of teen issues commenting, “Sadly, our students are dealing with some very difficult situations these days. It is our role as educators to offer them the support and knowledge they need to transition into well-adjusted and successful adults.”  She added, “We are pleased to have brought about a greater understanding of the pressures on young people today through the Dead Serious…About Life production and to have sent a strong message that there is love and support in the friends and adults in their lives … and ultimately that faith in our good God brings aid and healing to all in need.”