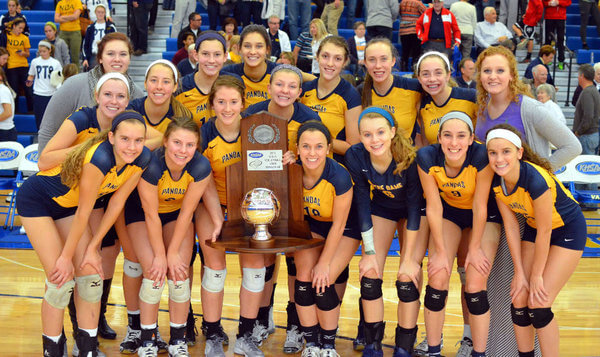 For the first time in KHSAA history, the fall teams of cross country, soccer and volleyball competed in their season state championship title on the same weekend. Golf concluded their season in October. Notre Dame Academy was the only school in the state who had a team in each of the three state championship events! Congratulations to the fall sports teams on a fantastic season.

Congratulations to the Soccer Pandas and Coach Sara McSorley on their 2013 State Championship! The Pandas beat Sacred Heart 2-0 in the state final at Paul Laurence Dunbar High School to finish with a season record of 24-2-3 while also setting the state record for fewest goals scored in a season. This is the Soccer Pandas fourth trip to the state finals in the last 5 years; their second state championship in three years and third overall. The Pandas previously won in 2011 and 2004. Way to go Pandas!

Congratulations to the Volleyball Pandas who fell to the periennal powerhouse
Assumption in the State Championship Final 3-0. Four-time defending champion Assumption and Notre Dame are two of the most storied program in Kentucky volleyball history. Assumption holds the state record with 18 championships. Notre Dame is next with eight. The rest of the state has combined for nine since the first sanctioned season of 1979. Prior to Saturday’s final, the Pandas last played for the title in 2007. It’s their 19th finals appearance overall.The Pandas finished the season with a 31-8 record.

Congratulations on a great season to Cross Country Pandas! The Pandas ran well this past weekend at the State Meet and finished 14th at the Kentucky KHSAA Cross Country State Championships. NDA’s Sara Borchers, Natalie Kleier, Olivia Kuykendall, Eliza Lenihan, Sydney Lenhof, and Alexa Colvin were all in the top 112 runners and senior Katie Schweitzer battled injuries finishing quite courageously and making the Pandas proud!

The Pandas captured the Regional Championship Title for the 25th time is school history, earning a berth to the state tournament in Bowling Green. Lone senior and team captain, Jill Edgington, had the best performance for the Pandas with a 26th place overall finish. Good job Pandas!