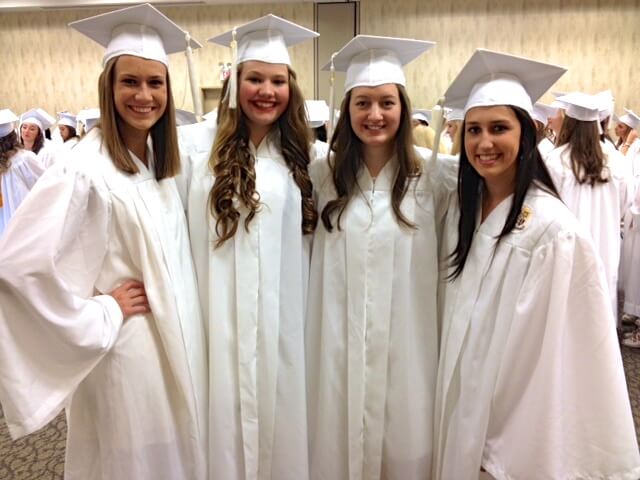 Notre Dame Academy celebrated the Commencement Ceremony for the Class of 2013 this afternoon at the Northern Kentucky Convention Center.  NDA’s 132 graduating seniors have been awarded over $12.3 million in scholarships (not including KEES money).  Elizabeth Romes was named valedictorian of NDA’s Class of 2013 and Marisa Lorch was named salutatorian.  NDA Principal Dr. Laura Koehl remarked on the tremendous achievements of NDA’s graduating seniors saying, “This is an amazing class.  We look forward to celebrating their many accomplishments and we wish them well as they begin the next phase of their journey.”

The NDA community was joined by Bishop of Covington, Most Reverend Roger J. Foys, D.D., Superintendent of Schools for the Diocese of Covington, Mike Clines, and the Sisters of Notre Dame Provincial Superior, Sr. Marla Monohan, SND, at today’s graduation.  Sr. Lynette Shelton, NDA president, commented on the spirit and success of the Class of 2013 saying, “These young women leave NDA instilled with a love of God, a spirit of service, and the skills and ideals to make a difference in our changing world.”