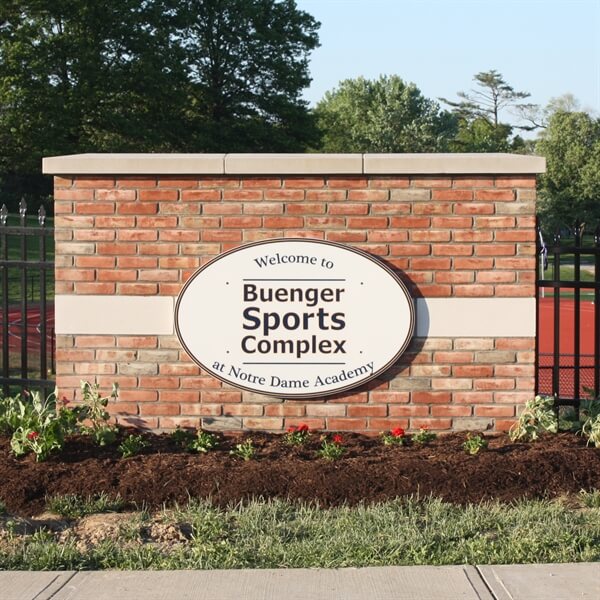 Notre Dame Academy hosted the dedication of the school’s Buenger Sports Complex on Friday, May 17.  The entire NDA community celebrated the new state-of-the-art track and field facility along with representatives from the Buenger Foundation, Bill and Mike Keating.  NDA Athletic Director Kim Gunning welcomed the nearly 700 guests in attendance.

NDA President Sr. Lynette Shelton spoke about the benefactor of the sports complex, former NDA student, Ann McCabe Buenger.  In addition to sharing some interesting quotes from Buenger’s senior yearbook, Sr. Lynette told those in attendance “Ann McCabe Buenger is a shining example of a woman making a difference throughout her life and through her legacy as well.”  She went on to say, “We are so proud and grateful to Ann McCabe Buenger and Clem, her husband, for their generosity, dedication and service to our community and especially to Notre Dame Academy.”

NDA senior Katy Zembrodt also spoke at the event expressing the deep appreciation of the students for the track and field complex.  As a member of NDA’s track team, Zembrodt gave personal insight on the significance of this valuable addition to NDA’s campus.  As a representative of the Buenger Foundation and close friend of the Buenger family, Mike Keating told the students that Ann Buenger was quite proud to be an NDA graduate. Although she passed away in November, he said Ann was very happy to hear that NDA’s new sports complex would carry the Buenger name.

Msgr. Williams Cleves, Chaplain at Notre Dame Academy, blessed the track and field during the dedication. The celebration ended with cheers led by NDA’s student council and a spirited rendition of Notre Dame Academy’s school song.