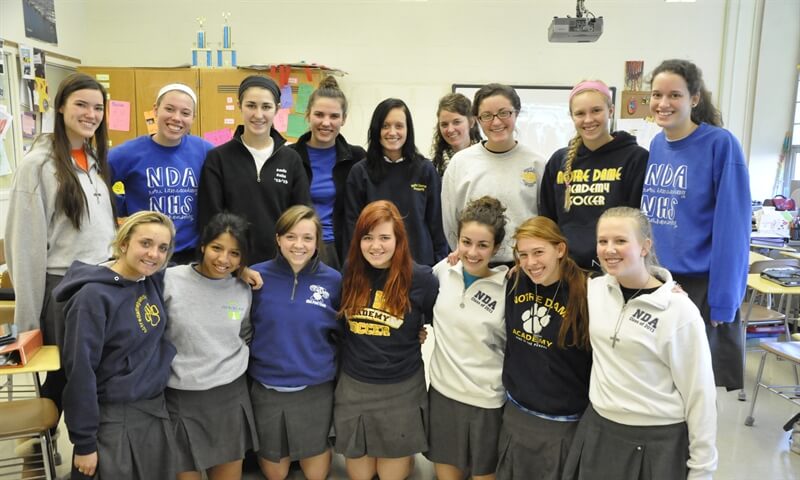 Students at Notre Dame Academy have been using their talents and ideas this school year to make a difference in the lives of young girls nearly 2000 miles away. Their project began when NDA’s Spanish 4 Honors students were learning about healthy lifestyles and choices. “They read about the Yo Puedo (“I can”) program, a self-empowerment program for girls ages 10-14 in Honduras,” said NDA Spanish teacher, Stacey Bill.

“Yo Puedo is a branch of the Shoulder to Shoulder Corporation that teaches young women in Honduras the importance of respecting and loving yourself as well as teaches them trades that improve their sense of self and abilities,” said NDA senior, Alex Lonnemann.  Shoulder to Shoulder was started by a team of physicians at the University of Cincinnati and when NDA students communicated their interest in getting involved with the organization’s US office they were sent the program’s curriculum and asked to do whatever they could to help. The NDA students immediately began brainstorming and they decided to make print materials for the Yo Puedo program’s classes.

“Our involvement in this program included creating brochures that offer advice and activities to build self-confidence and dignity. This is more than just a school assignment. It is our school mission put into action extended beyond the boundaries of the United States into countries that are less fortunate,” said NDA senior Nina Butler. “By being a part of this program, we are learning and developing the same characteristics within ourselves that we are trying to instill within these young women. This is only the beginning of our involvement within the Yo Puedo program, and we are excited to see just how much it will grow,” states Lonnemann.

NDA’s Spanish Club and the Sociedad Honoraria Hispánica also wanted to get involved, and so they voted to have a fundraiser to raise money to pay for one student to attend high school in Honduras for a year. They held a bake sale that went beyond their wildest expectations. They raised $500 which is enough to pay for one year of high school and donate $75 to the Yo Puedo project.

The Shoulder to Shoulder organization was excited to work with an all girls high school and impressed with the materials the NDA students produced. “This service learning project has opened many doors for us, and we have decided to continue on with a sister school type of relationship with the schools that offer the Yo Puedo program next school year,” remarked Ms. Bill. The NDA students are also excited about their continuing relationship with the Yo Puedo program and the opportunity to empower the young women of Honduras. “We hope to build lasting relationships with these young women that will continue to impact us as graduates,” said Butler.