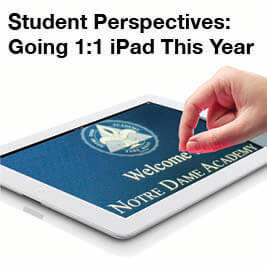 After an impressive showing at the Cincinnati INTERalliance’s “Women in Technology” conference in November, NDA SWAT (Students Working for the Advancement of Technology) team members decided we were ready to submit a proposal to present at the KYSTE (Kentucky Society for Technology conference in March of 2013). Conference coordinators gave Notre Dame women the following response: “The feedback from our table mentors has been overwhelmingly positive. They were so impressed by your students’ contributions to the day, and by your leadership and dedication to student development.” Subsequently, we named our proposed presentation for KYSTE: “Student Perspectives: Going 1:1 iPad This Year”.

In early January, we were officially accepted as presenters. Our students will present real life applications of how NDA’s 1:1 iPad Initiative has transformed their learning. Student presenters are uncommon, thus placing us in one of the largest venues at the convention and chronologically in the first group of sessions.
It will be an honor to lead these innovative young women at this esteemed conference.
Stay tuned!  -Molly Mullee
« NDA Junior Wins MLK Essay Contest
Notre Dame Academy Celebrates Catholic Schools Week »