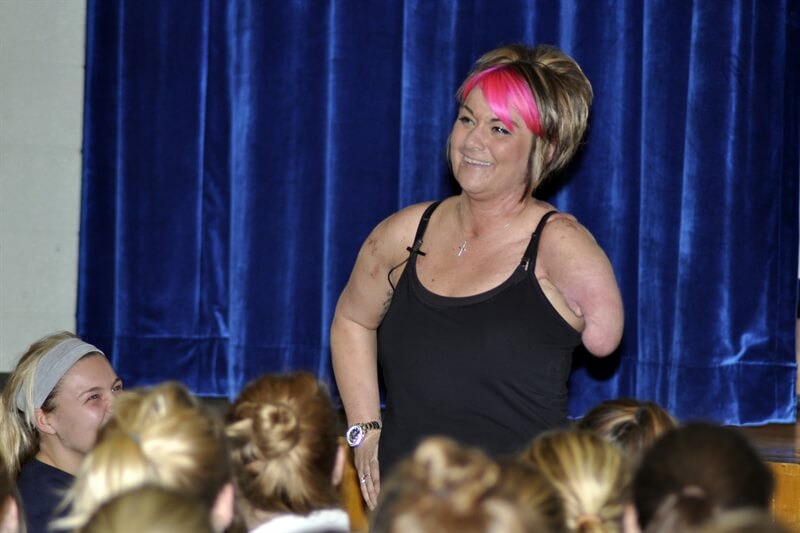 As a two-time member of the National Junior College Athletic Association women’s volleyball All-America team, Panzau knew what it was like to be on top of her game – and on top of the world. Somewhere between life as a competitively driven high school athlete and the early years of college, Panzau began heading down a destructive path. She was trapped in a pattern of making poor choices that would one day catch up with her. That day was August 23, 2003, when Sarah’s car – and her life – spun out of control. With a blood-alcohol level nearly four times the legal limit, the 21-year-old decided to drive home drunk, missed a highway exit and rolled her car four times.

Panzau recognizes it was a series of poor choices that led up to that tragic night and hopes others will learn from her mistakes. She started speaking to students because, until the crash, she was in their shoes: invincible and with the world ahead of her.

“I am the victim of my own bad decisions to hang out with the wrong crowd, get involved with drugs and to drive drunk,” Panzau explains. “Today, I stand before students to impress upon them the importance of making the right choices – to not drink before they are 21, never drive drunk, respect parents, rise above disabilities and to learn the meaning of ‘real’ friends.”

Sarah delivered a presentation that poignantly described the physical and emotional pain of a life that is forever changed because of the poor decisions she made. Her message was powerful and meant to be an eye opening experience for students as they were reminded of the importance of understanding the consequences of their actions.

During her presentation, Panzau encouraged students to look out for each other and reminded them to seek help, if needed. She also touched on the difficulties she has encountered as a result of her disabling injury, including a lack of social acceptance. She related that before the crash, she was the pretty, popular girl with whom everyone wanted to be friends. Now that she is technically considered disabled, people treat her differently. Sarah encouraged students not to let physical disabilities bias their thinking and to show tolerance and acceptance of others.

Notre Dame Academy students were touched by Sarah’s story of courage, determination, and the importance of making the right choices in life.