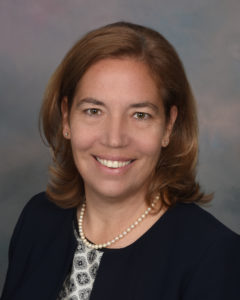 The search for a new president was necessitated by the resignation of Dr. Laura Koehl in February 2021. In April 2021, the NDA Board of Directors formed a Presidential Search Committee and began an extensive nationwide search in partnership with Educational Directions of Portsmouth, Rhode Island. The work of the Presidential Search Committee and Educational Directions resulted in a recommendation that Trish Miller be appointed president.

“I feel truly blessed to have the opportunity to serve in the role of president at Notre Dame Academy and given my background in educational and business leadership, I feel that I am in a unique position to make a positive impact at NDA,” says Trish. “Over the past several years, I have been able to leverage many of the professional strengths I developed in my business career to effect positive change in a variety of educational settings. As a graduate of Ursuline Academy, and a parent of four children, all of whom attended Catholic schools, I truly value the academic rigor and character development that a Catholic education provides.”

“Trish Miller is committed to the mission of the Sisters of Notre Dame to proclaim God’s goodness and provident care,” said NDA Board Chair Mark Hausfeld. “She will bring her gifts and experience to serve wholeheartedly the community of Notre Dame Academy to educate young women to make a difference in the world.”

Miller has both educational and business leadership experience. She began her career as principal owner of Brands Insurance and subsequently co-founded West Chester Permit and Transportation Marketing Services in West Chester, Ohio. After 20 years, Miller found herself with a rare opportunity to discern what she was really called to do. Since education had always been a very strong focus for her and her family, she made the decision to teach. She joined Teach for America giving her the opportunity to develop as an educator, which she found to be both challenging and humbling. Her experience enhanced her passion for teaching. This work also reinforced her fundamental belief that every student is entitled to a quality education. Miller went on to teach at Withrow University High School and Aiken New Tech High School. As a Catholic, however, she very much wanted to be involved in Catholic education in a leadership role. She subsequently joined the La Salle High School community as associate principal. Working with the principal, she has focused on the advancement of La Salle’s mission and vision.

Trish Miller is truly a mission focused leader who is grounded in her Catholic faith. Also, she understands at a personal level the transformative experience thata school such as Notre Dame Academy can provide. As a young woman, she was blessed with the opportunity to attend Ursuline Academy in Cincinnati, an all-girls Catholic high school sponsored by the Ursuline Sisters. This experience empowered her with the confidence and the desire to pursue excellence without reservation in all aspects of her life. It laid the groundwork for a successful, rewarding and faith-filled life journey.

Miller is now looking forward to being part of our NDA community and, in collaboration with the Board of Directors, faculty, staff and administration, continue to provide for a transformative experience for our young women. She is very excited to return to an all-girls environment where she sees the impact that a school such as Notre Dame Academy has on students in their academic, social and faith development. She knows that schools such as Notre Dame Academy are significant in the formation of young women especially with everything that is going on in the world today. She believes that she has been given the gift of experience both as a business and educational leader that will serve her and Notre Dame Academy well in the role of president.